Pembroke Castle have just completed another successful year of Rock the Castle, with headline acts from The World Famous Elvis Show starring Chris Connor, and UB40. 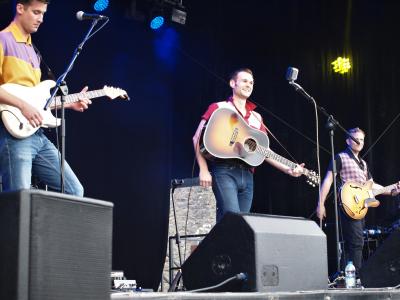 On Friday 15 June, the night was kicked off by superb 12-piece local act Suburban Soul, made up of former Pembroke Comprehensive School pupils who performed together whilst attending the school 15 years ago.

Next to the stage were The Bluejays, a four-piece vintage rock’n’roll band who really rocked the castle with the hits of Buddy Holly, Chuck Berry, Eddie Cochran, The Everly Brothers, Gene Vincent, Little Richard, Dion and many more.

Just before the headliner took to the stage, the castle staged a Best Dressed Elvis Competition, with wannabe Elvises from near taking to the stage to show off their costumes and best Elvis impressions.  In the end, the crowd could not decide between two of the finalists, and the prize of four UB40 tickets was split between two local children.

The evening was brought to a fantastic close by world-renowned Elvis performer, Chris Connor.  The King was finally in the castle. Chris burst onto the UK Elvis scene in 2009, and was voted by the first ever world-wide Elvis Presley fan poll as The Greatest Elvis Tribute in the World. The World Famous Elvis Show now tours all over the world and features 12-piece band The Steels, and backing vocals from The Sweet Harmonies.  It was a magnificent show, recreating two popular Elvis Presley concerts, and featured many of his hits.

On Saturday 16 June, first on the bill was Pembroke’s very own, 14-year-old, Connor Adams.  A singer-songwriter who has just recently burst onto the local music scene, Chris played many covers of classic hits along with his own material.  He had the crowd singing along. If you enjoyed his performance, why not check out his debut album, Dirty Dishes?

Next on the line-up was DJ Gold Dubs who got the crowd bouncing with his classic set of reggae dance hits, before UB40 took to the stage to leave Pembroke Castle’s Rock the Castle weekend on a magnificent high. Formed in the summer of 1978 in a Birmingham basement, UB40 filled the charts in the 80s and 90s and are the world’s most famous reggae band. The band, featuring Robin Campbell, Duncan Campbell, Earl Falconer, Brian Travers, Jimmy Brown, Norman Hassan, Martin Meredith, Lawrence Parry, and Tony Mullins, treated the castle to their well-known hits such as Red Red Wine, I Can’t Help Falling in Love With You, and Kingston Town.  The show was a sell-out performance, and had the packed castle singing and dancing.  They really did rock the castle.

Castle Manager, Jon Williams said ‘Pembroke Castle would like to thank all staff, contractors and everyone who attended Rock the Castle for helping to make it a great occasion.’

The whole weekend was a wonderful success, and we can’t wait for next year!