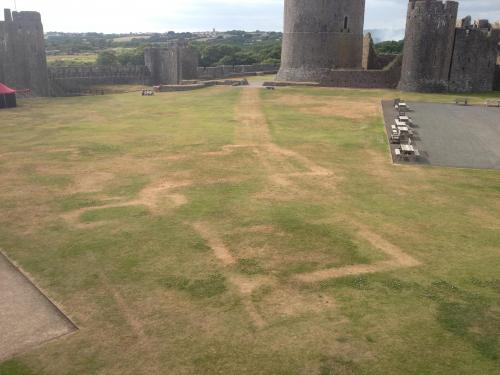 Dyfed Archaeological Trust, funded by the Castle Studies Trust, will start a two week excavation at Pembroke Castle from Monday 3 September. The excavations and topographic survey will further advance the understanding of one of Wales’s and the UK’s most iconic castles and birth place of Henry VII.

Parch marks show the location of the hall

Tantalising glimpses of what lies beneath the surface were revealed in aerial photographs in 2013, with parch marks revealing the outline of a possible late medieval double-winged hall house. This was further confirmed by geophysical surveys carried out by Dyfed Archaeological Trust, funded by the Castle Studies Trust, in 2016.

Under the guidance of well-known castle expert Neil Ludlow, Dyfed Archaeological Trust, helped by a team of volunteers, will put in two trenches to understand more about the form, date, context and function of the remains.

Additionally, they will do a topographic survey to make a detailed record of the layout of the castle. 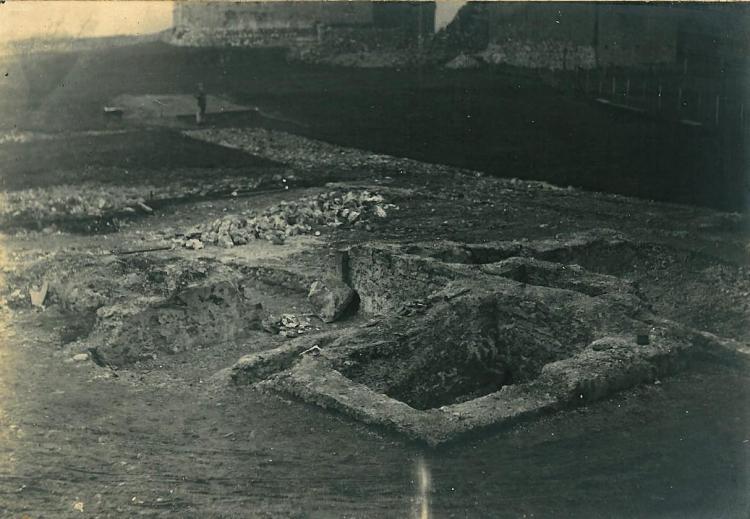 Excavation at Pembroke Castle in 1931

“The geophysical survey carried out in Pembroke Castle, in 2016, funded by the Castle Studies Trust, showed a large, winged building that resembles, in plan, a late-medieval manor house. This is an unusual find within a castle, and has additional significance at Pembroke as the possible birthplace of King Henry VII.

But this is still guesswork, as nothing else about the building is known. All we really know is that it was excavated in the 1930s without records. Thanks to the support of the Castle Studies Trust, some of these questions will be answered as well as learning more about later medieval high status living.”

"The Castle Studies Trust is really excited about the forthcoming excavations and learning more about this mysterious building. Hopefully the dig will be able to answer some key questions such as the building’s date, function and also what the lives of people using it were like.

Pembroke is a major monument but one not in state care and therefore has not been studied in the same degree of detail as many other castles which makes the Trust so keen to fund this research.”

“Our visitors have all been asking about the marks on the ground, and it has been nice to be able to explain that we are now going to excavate the site.  It is very exciting for us as nothing like this has been achieved in the castle since the 1930s”. 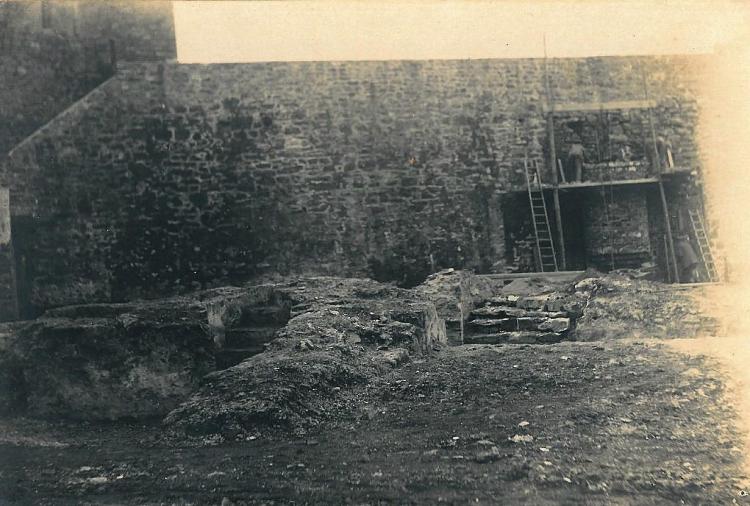 Excavation at Pembroke Castle in 1931

Visitors to the castle between 3 - 16 September will be able to see the excavation taking place with the purchase of a castle admission ticket, or by using their annual membership.  There is no need to book.